After a bad summer rebuilding the car (which has been christened "White Lightening" (on account of its weight) by fellow Alfisti ), I took it down to Donington for the AROC track day that Bill Smith and I organised. The day itself was a stunning success with 90-odd Alfas turning up. My day was less good, as the clutch gave up the ghost (the friction material ripping off the friction plate) part-way through the morning. On top of that, I really wasn't happy about the way the engine was performing. The car was nowhere near as quick as it should have been - and not just because the driver had lost confidence after the Combe crash 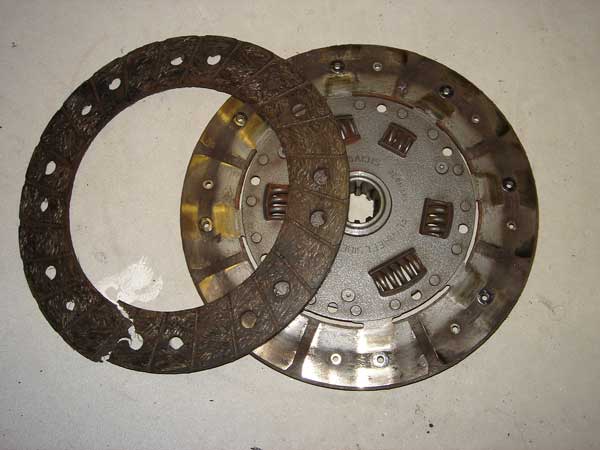 The remains of the clutch 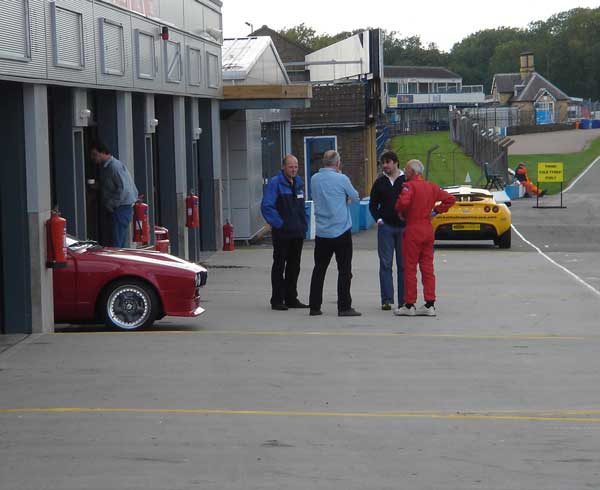 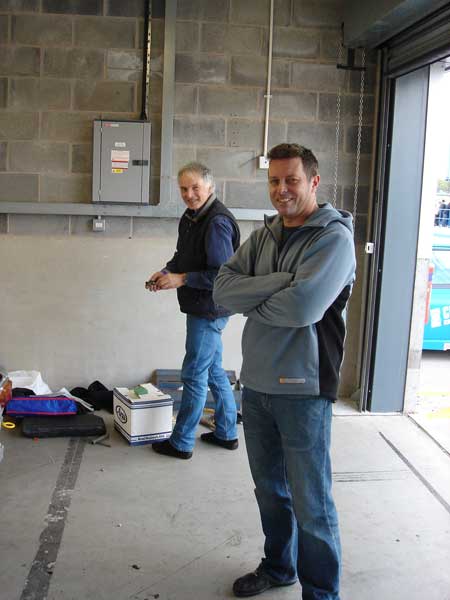 Over the Winter I've decided to go the whole hog and shorten the diff ratio to get some more zip into the car. I had two spare non-LSD diffs which I took to guru Charlie Skinner to get rebuilt with a race gripper unit from Alfaholics. It transpired one was an ultra-short 4.77 unit - ideal for sprinting and track use (though calcs suggested my red-line top speed would be only 110mph. I also took the opportunity to replace the donut with an aluminium conversion from Alfaholics. This seemed a particularly good idea since the prop would be rotating at about 8500rpm


Testing the car produced two issues. Firstly, one that's been around for a while but was showed up by the new centre bearing: the tail of the gearbox was sitting too high. No idea why this is and I ended up shimming down the bracket. The other was a vibration which started at about 80mph. I eventually took the rear of the prop off, finding it had a small dent (think 8500rpm) and got it balanced along with new UJs. This improved matters.


Spring 07 The next issue was the flat feeling in the engine. I did some tests with my G-Tech Pro RR meter which has given some great results on other cars. The output really didn't look good - suggesting about 100bhp (from a motor that was supposed to deliver 170bhp). Hunted around for issues and found that the carbs were horribly out of balance and there was some crap in one of the jets. This helped but didn't fix the issue. I'd booked the car in for a tune with Pete Lander at Sigma Engineering at Gillingham so decided to let him play with it. 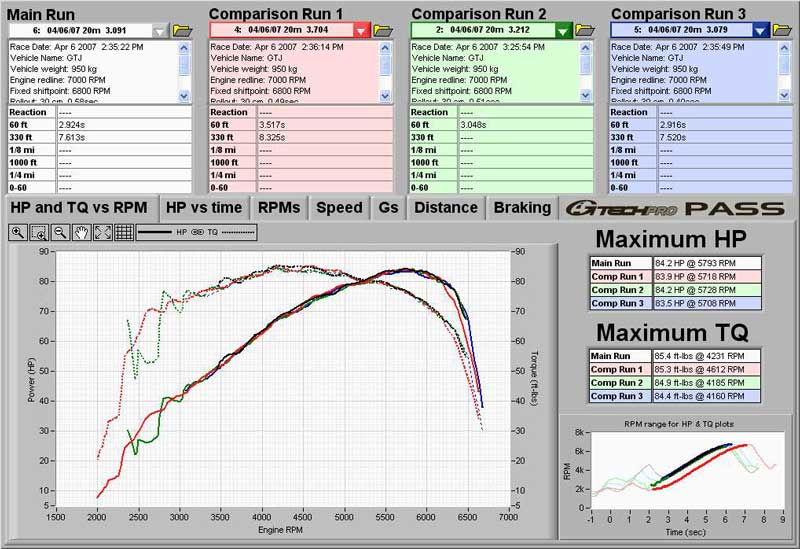 Output from the performance meter 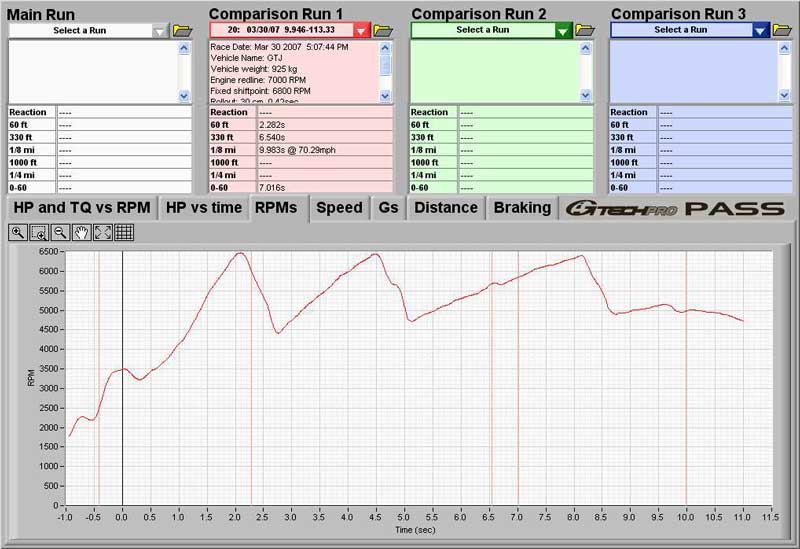 April 07 600 miles later and the annual pilgrimage to Combe - this year to lay to rest the ghosts of last year. First stop was with Pete Lander. He put the car on his rolling road and (to cut a long story short) by reducing the max advance to 35 deg and reducing the chokes to 36mm he liberated an extra 20BHP. His machine said 170 bhp at the wheels - no-one believes rolling roads
The day itself was superb - the weather was great and the car behaved very well 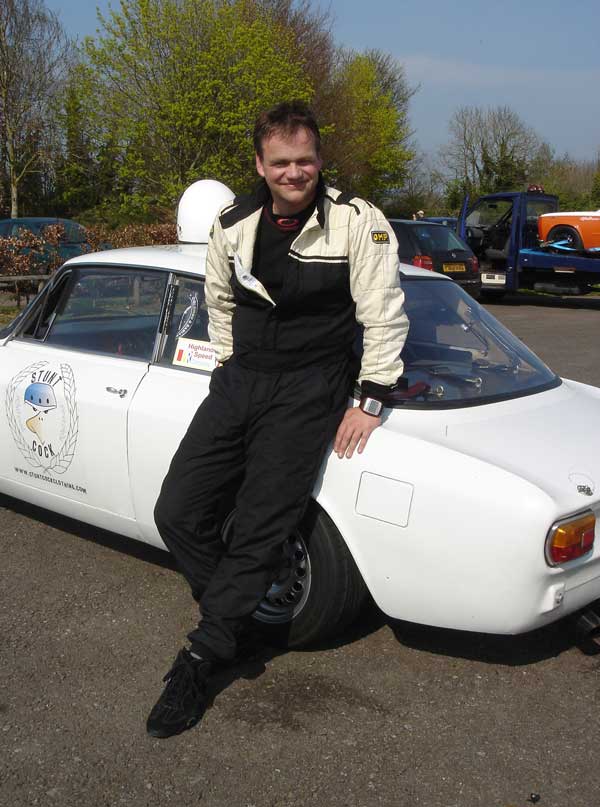 I wear a fireproof suit these days 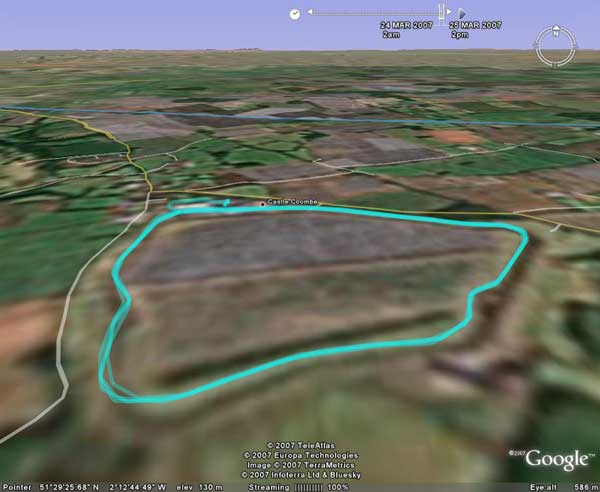 GPS mapping from the car of Combe layed onto GoogleEarth

May 07 Post track day inspection showed a number of things. The vibration has loosened quite a few things so Loctite is now the order of the day. More frustrating though is the clutch. A slight drag has worstened to a major issue. The slave is new and a new master didnt fix it. With lots of help and moral support from Ian Ellis, we finally figured out the the flywheel is 10+mm thinner than it should be - throwing everything out of reference. The only solution seems to be to fit a new flywheel. The one on there weighs 6.6kg. I'm fitting a long-5th gearbox too to give more top speed. 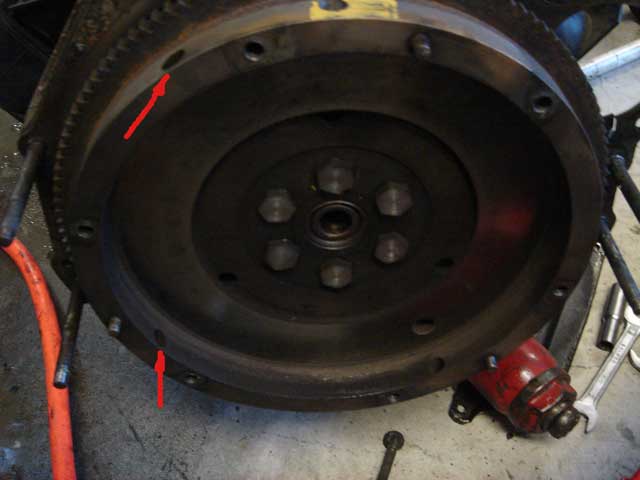 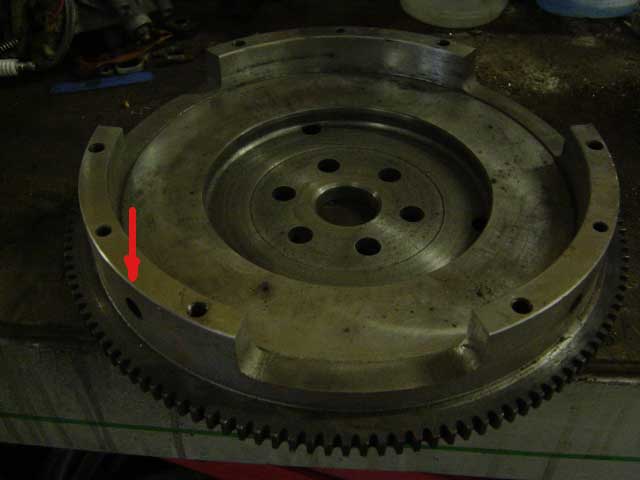 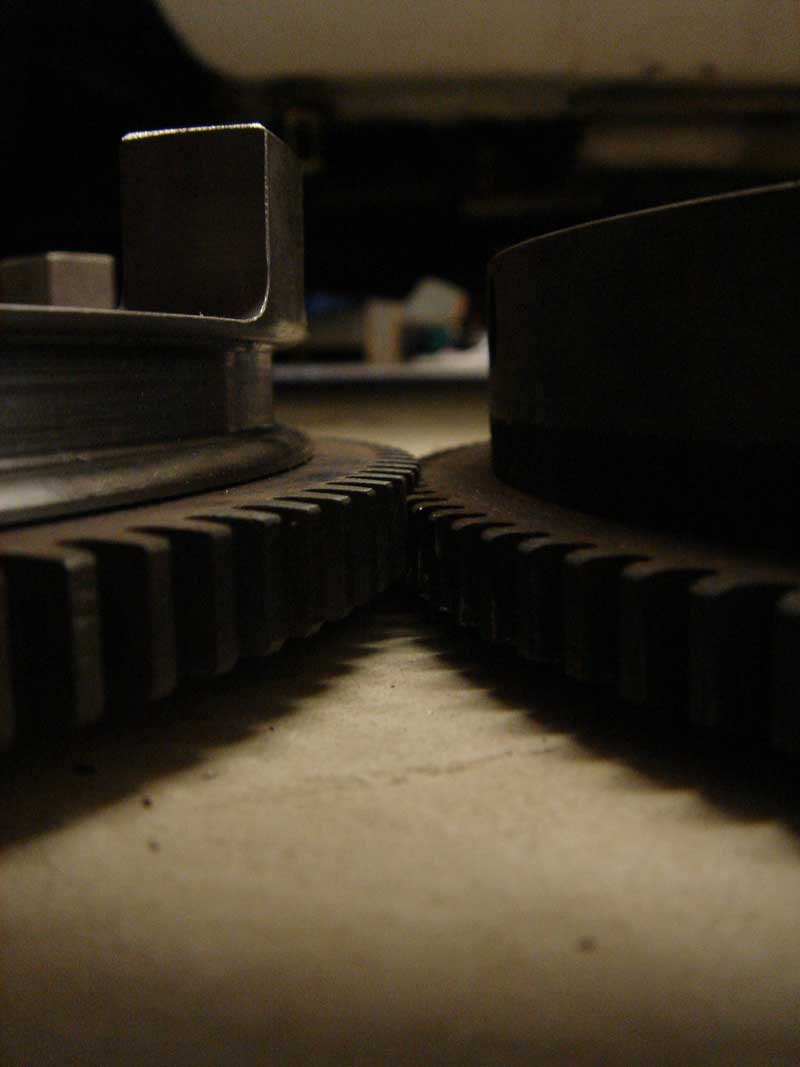 JP flywheel next to the new Alfaholics one. The JP one can clearly be seen to be much thinner 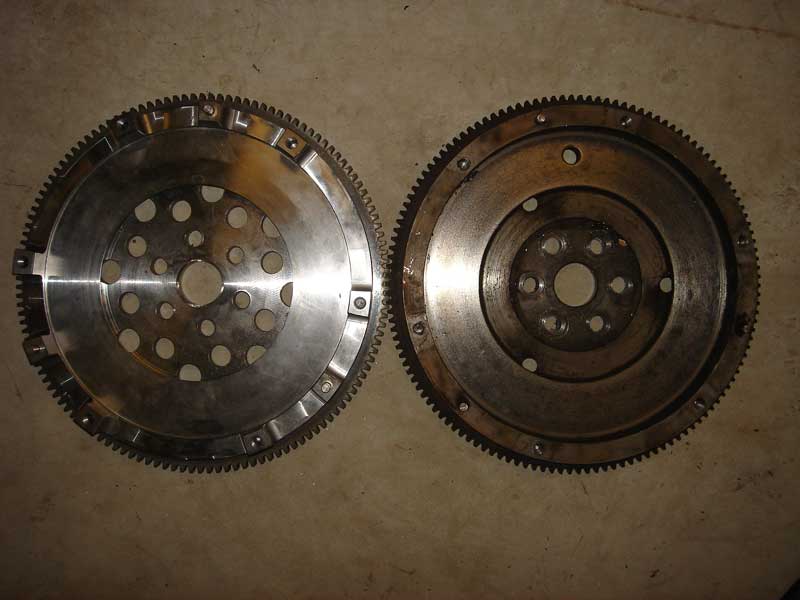 Side-by-side: the shiny new Alfaholics fly is clearly machine in a more sophisticated way than the JP version and is 0.8kg lighter at 6.0kg 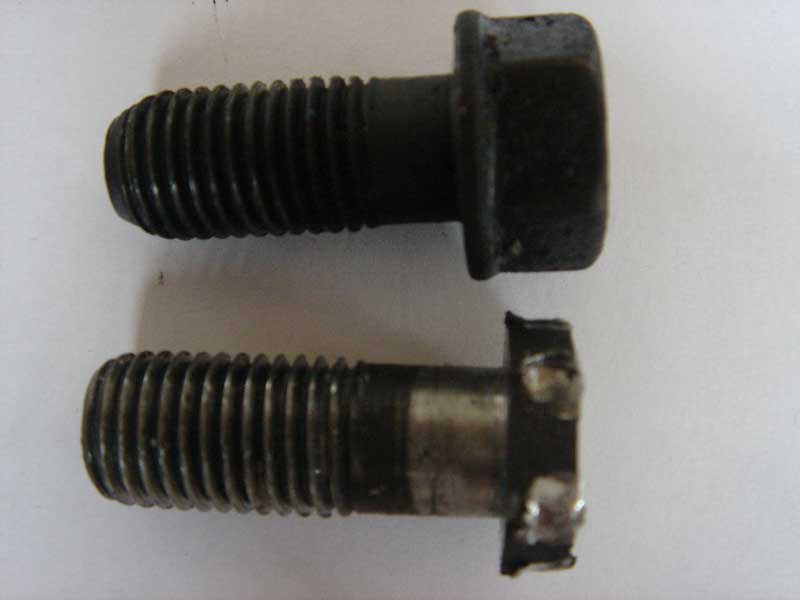 June 07 June was a good month. Got the clutch in and everything is working brilliantly. The car is, without doubt, running the best it ever has. Time for a bit of competitive action. Luckily I got a reserve slot at the Boyndie sprint (Banff, Nr Aberdeen). The weather was superb and the people there just incredibly friendly (I should be used to that by now - but such a contrast to the few sprints I've done in Englandshire). The track was incredibly tight as you'd expect but a total riot to drive. My times (circa 91secs) were about 3secs off being competitive but I really needed to be running some purpose-built track tyres like everyone else - my A539s just don't cut it. So that's the plan for the next one.... 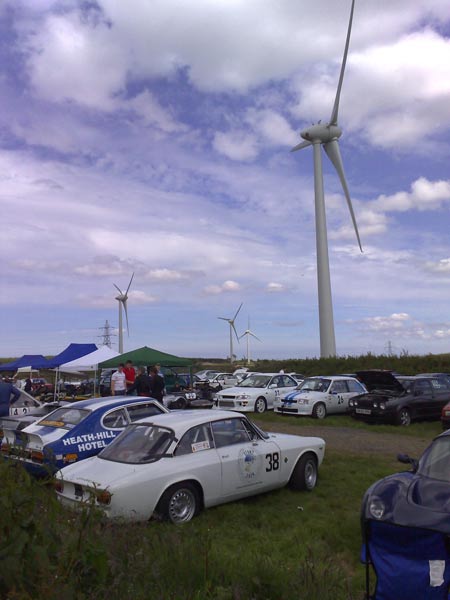 Fantastic weather and rather nice windmills 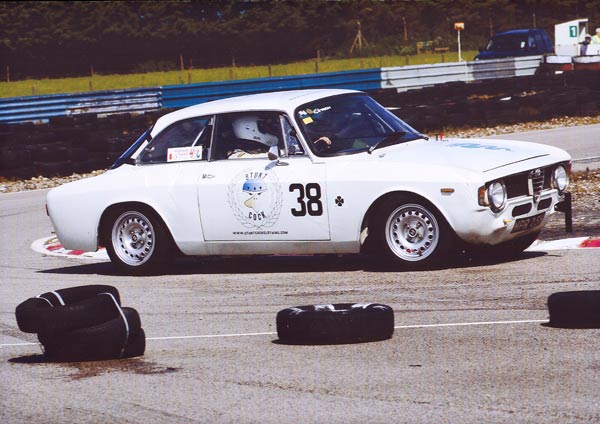 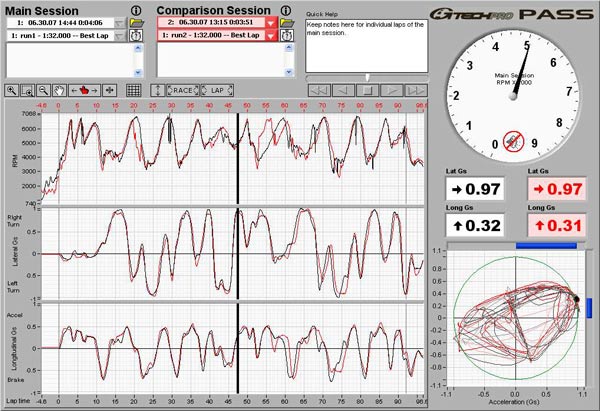 July 07 A new set of "Medium" Yokohama 048R tyres and the results are great. Under braking the maximum decelleration increases from 0.8G to 1.2G - a 30% reduction in stopping distance. So it was off to Alford for the GAC sprint there. A fantastic drive along the A939 early in the morning on a superb day weatherwise. The sprint had to be cut to three runs only. The new tyres made me far more competitive though I still need to learn to lean on them a bit more. I messed up one of my 3 runs which was frustrating but ultimately I was very happy with the way the car is running and delighted with the tyres. 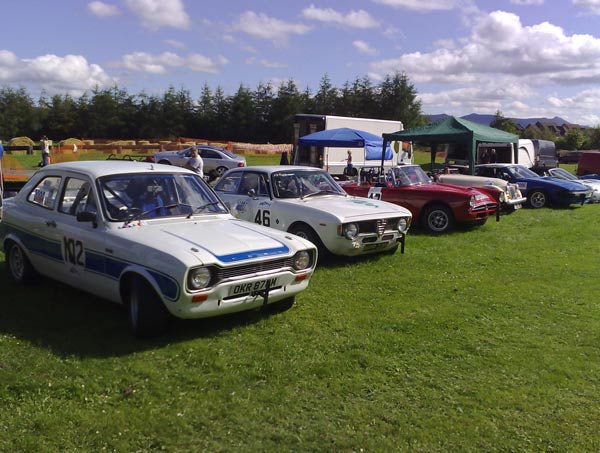 Two class wins at the last sprint of the year at Golspie was satisfying. Having the cyliner head gasket go on the way back, less so

The 07 Donington trip went really well (after a rushed repair of the head gasket involving a full skim - the car was a full 9 seconds faster than last year.